John James Audubon with his double-barreled flintlock shotgun as shown in the American Audubon Society’s Baby Elephant collection of his prints. Central Georgia –-(Ammoland.com)- My single-barreled fowler and accessories are as close as I could come to hunting some of the same birds in teh same way that Audubon did with a period-correct firearm.

John James Audubon was not only a wildlife artist who produced his classic portfolio of American birds, he was an avid hunter who very often ate the birds that he shot. The American Republic was a very young country when he lived and hunted in Louisiana.

To get something of the feel of Audubon’s experiences, I took a single-shot Davide Pedersoli 12-gauge flintlock fowler on a hunt for Specklebelly geese in western Louisiana.

I hunted with Capt. Scott Ritchey, who has his Louisiana Outfitters’ hunting lodge about five miles east of Iowa and a fishing lodge on a lake near Lake Charles. You may view a video of this hunt at: http://youtu.be/GVkQylnoU2g. Ritchey also has a website at www.luisianaoutfitters.net where you may book hunting and/or fishing trips.

The Louisiana that I saw was very much different from the Louisiana that Audubon experienced. Rice growing now dominates western Louisiana, but rice as a major crop was still 100-years in the future while Audubon lived. The species of birds that he saw are still there, but the sunlight-blocking huge flocks that he witnessed are no longer present.

Except for the land itself, few things remain in Western Louisiana that date from Audubon’s time.

Nonetheless, the gun that I carried with its Mortimer-designed lock and clean lines was one of the most advanced-designed fowling pieces from the early 1800s. It featured a false breech for easy barrel dismounting, a sub-chambered barrel, a waterproof pan, roller-mounted frizzen and a sliding half-cock safety on the lock plate. Pedersoli’s replica is stocked in American walnut, well checkered, has a barrel that goes from octagon to 12-flats to round to give the gun a good balance and swing. 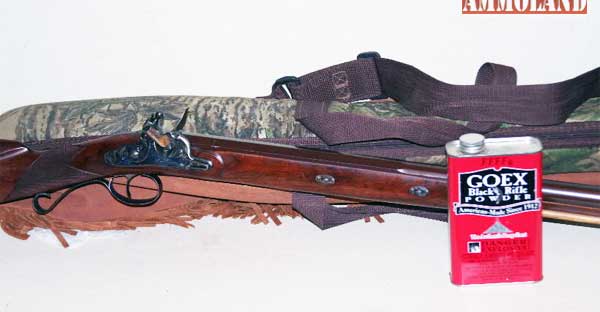 This gun was no stranger to me. I had used it to hunt Snow and Blue geese in Canada, Pheasant in Nebraska, Quail, Squirrels and Rabbits in Georgia and with round-ball loads had shot Bison and Wild Hogs. I much prefer 12-gauge and larger cylinder-bored guns for waterfowling. These and many other hunts are described in my book X-Treme Muzzleloading. ( http://tiny.cc/2zyauw )

For Specklebellys I loaded the gun with 25 grains of GOEX FFFg to fill the smaller diameter sub-chamber in back of the barrel, 75 grains of GOEX FFg for the main charge, a now discontinued Winchester Red Wad for 1 1/4-ounce of shot (now being made by Harvester) and 1 1/4-oz. of no. 4 HeviShot (this poorly-sized shot is very irregular and contains shot ranging in size from no. 7s to 2s) followed by an over-shot wad. The pan is primed with GOEX FFFFg priming powder. This is a well-balanced load and is the cleanest-burning black powder load that I have ever shot from any muzzleloading gun. The plastic wad helps insure complete combustion of the powder.

My first morning’s hunt was a duck hunt from a boat blind with Capt. Scott Ritchey. The heavy, wide aluminum boat was equipped with a Go-Devil engine to help it power through heavy weeds in a former rice field that is now managed as a mitigation property. I had serious problems rising from a sitting position, seeing the birds from my low position in the boat, navigating the long-barreled gun through and over the blind’s cover and tracking the birds. Five shots resulted in one bird being hit, but not recovered. The boat blind’s height was fine for a person who was 6-feet tall, but not for someone like me who was six-inches shorter. Blue-wing teal would come swinging by within range, but I could not rise and shoot before they were too far out to risk a shot.

I also had other problems. Once I failed to cock the gun when I had a good shot at a Specklebelly that was directly over us. (You can credit that error to Specklebelly fever. I wanted that bird too bad.) My body got tired, stiff and was slow to respond. When we were pulling out I let Capt. Ritchey empty the gun, but the dulled flint did not fire on the first attempt. By the end of the hunt, I was waddling around as if drunk and too stiff from the cold to shoot. I could see little potential for me shooting significantly better from the boat the next day, and I asked Ritchey if he had the goose blind available. As it turned out, he did.

Mortimer’s Revenge
Both I and Mortimer were embarrassed at our failure. Technically things were turning in our favor. Because only Specklebelly and Snow geese were almost the only potential targets in the rice field, I could load with my most effective large-fowl load with 100 grains of powder, a plastic wad and 1 1/4-ounce of no. 4 HeviShot and not have to worry about mixing smaller shot in the load for blue-wing teal. I had also completely cleaned the gun and re-touched the flint. This time I would be shooting from a blind that was sunken into the field. This blind was all welded steel and was wedge-shaped with the wider end at the bottom to help keep it from floating out of the saturated soil.

My guide would be 20-year-old Jordan Ardion who had grown up with these geese and had hunted with members of the Faulk call-making family before becoming a guide for Louisiana Outdoors. He guided while on Winter vacation from his studies to be a Chemical Engineer. In short, he knew the area, his birds and how to talk to them. (I also produced a video about Faulk’s American-made wild game calls that may be seen at:http://youtu.be/fySMXPIPvpI .)

Specklebelly geese differ from Snow geese in that they usually feed in smaller family groups, incorporate more grain in their diets and decoy more easily, provided that they are called-in by someone who is skilled in making authentic-sounding Specklebelly noises. Flights of Specks may be near flights of Snows, but the Specks are more comfortable feeding separately in other fields or off to one side of the Snow Geese.

My first attempt at a Speck was at a goose that was directly overhead. I was standing, the swing was good; but the flint did not spark. UG! I retouched the flint again and later had a shot in front of the blind with exactly the same result. Obviously it was time to change flints. I had a spare with me and swapped them out. Although hardly filling the sky, there were periodic flights of Specklebellys starting about 6:00 AM and continuing until we left at about 10:00 AM. Many more Snows were seen than Specks, but the Snows would not decoy.

Now, hopefully with everything straightened out so far as Mortimer was concerned, it was time to get some geese killed. The next opportunity was a bird flying in back of the blind. I rose, pushed the grass out of the way, poked the gun out, tracked the bird and fired. The gun fired instantly, and the bird fell. It poked its head up, and I reached for my Mossberg pump to kill it. However, Adroin said that he would get it and ran through the muddy field after it (not easy to do in waders). That bird was recovered, and I had one more to go.

Asked what he thought about it, Adroin said that he was impressed with the smoke, noise and how the gun shot. The next flight of geese also came from the back of the blind and crossed. By the time that Adroin called the shot and I rose to shoot, they were going away. I picked out a bird that was at the opposite end of the blind and fired. That goose was hit by the full charge from the gun and fell dead from the impact.

This 35-40 yard kill provoked a whoop, a “That thing kills like a shotgun,” remark from Adroin and a high-five as he went to retrieve the bird. Mortimer with its two Specklebelly geese taken with two shots

Popular movies, like The Patriot, show flintlock guns being used, but what is never shown are the common misfires, lost flints, broken flints, loss of prime, wet prime, broken cocks, snapped frizzen springs, clogged touch holes and other ails that can befall users of flintlock guns. The advent of percussion ignition helped solve many of the problems that had plagued flintlock hunters for more than two centuries.

Another feature of flintlock waterfowling is that the side-blast from the vent hole may catch dry grasses and start a fire that could burn down the blind. This was a real possibility on this hunt, which is why I shielded the blind’s grasses with my shooting bag. Side blast from flintlock guns can ignite dried grasses covering the duck blind.

Why Hunt with Flintlock Guns?
When the limit of fowl in only one, two or three birds, it makes a more interesting hunt to use some of these antique-pattern guns to gather the few birds that may be taken. Because of the necessity to use non-toxic shot, even from period guns, the loads used need to be individually crafted to suite the hunt and the game.

Audubon would have thought it a very bad day indeed if he did not come home with 25 birds. One advantage of using his double gun is that he could load one barrel with small shot for the smaller species and the other with coarser shot for larger fowl. He also had the advantage that he was a considerably more robust human specimen that I am and was very well-practiced at the hunting as well as the pictorial arts.

You may view a video of my Specklebelly hunt at: http://youtu.be/GVkQylnoU2g.

About William Hovey Smith: As a Professional Geologist and an Outdoor Writer, Hovey has had the opportunity to live and hunt over most of North America. He was always interested in outdoor writing and sold his first articles in the 1970s and have continued with newspaper, magazine and book writing every since. Hovey has done beat reporting for regional newspapers, been published in more than 80 different publications and has produced 15 books and most recently both screen and stage plays. Visit: www.hoveysmith.com