Buckeye, AZ –-(Ammoland.com)- The Bloomberg propaganda machine has been working overtime doing its best to convince large, national chain stores and restaurants to ban the carry of firearms on their properties.

The latest target of this push is Target stores. The focus has been on some misleading stories about folks, mainly in Texas, who have been using the lawful, open carry of long guns as a political statement and protest.

The media attention, fueled by press releases, letters, and petitions from various Bloomberg minions has even caused a bit of a rift within the rights community. Various bloggers and pundits, including an official NRA blog and people well-respected in the rights movement, have posted some pretty scathing comments critical of open carry activists.

Open carry of firearms, including long guns, is nothing new. It is very common in many areas, and it is completely legal in almost all states. Open carry of long guns is less common than open carry of handguns for the simple reason that it is less practical and convenient.

Typically people carry a gun for one of three broad reasons:

Bloomberg and his Astroturf groups would have you believe that open carry is a dangerous and unusual practice that businesses should ban on their premises. It has never been illegal in most states and has not been a problem. (Image courtesy of www.OpenCarry.org)

Thousands – maybe hundreds of thousands – of people openly carry firearms in this country every day (along with the millions who carry discreetly). Whether they’re carrying long guns or sidearms, it does not generate fear or excessive discomfort in the vast majority of people they encounter. People don’t stop shopping, they don’t leave restaurants, and they certainly don’t dive under tables, hide in bathrooms, or run for the exits.

Occasionally some hoplophobe (a person with an irrational fear of weapons) will call the police and make a report. These days, police dispatchers have learned to ask if the person is making threats, waving the gun around, or engaging in some criminal activity. That’s usually enough to clear up the situation.

They inform the caller that open carry is legal and the matter usually ends with that. Occasionally someone will make some sort of complaint to the management of an establishment, resulting in a request that the open carrier leave, or they will express their irrational fears – or political views – directly to the open carrier.

Consider that for a moment. How threatened do you think a person is feeling if they are willing to approach the “guy with the gun” and tell him he shouldn’t have it?

Never has someone legally open carrying suddenly gone berserk over a bad cup of coffee or an inflated price tag – or a request to leave the premises – and started shooting people. Never has a robbery or mass shooting begun with an individual or group of people casually walking around with their firearms in full view. And never have we seen people rioting in panic at the sight of someone engaging in lawful open carry. 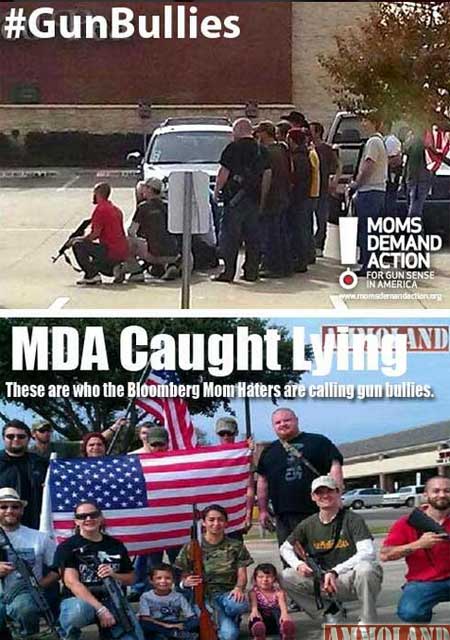 Several months ago, an anti-rights group began circulation a picture that looked like a group of armed men formed up in skirmish-line fashion preparing to take aim at some anti-rights activists across the street. The picture, and accompanying comments, was picked up by a variety of news outlets and hundreds of blogs complaining about the bullying tactics being employed by the “gun-nuts.”

In fact, the reality didn’t match perception. The photo was actually a side-view of the open carry group as they were posing for a group photo – well away from the anti-rights folks. From the side, it looked menacing, but from the front, we actually see families with babies and smiling faces with no hint of threat.

The misrepresentation of that photo worked so well though, that it has become the preferred tactic of groups like Moms Demand Action and their parent organization, Mike Bloomberg’s Everytown for Gun Safety. They get pictures of peaceful open carry protesters, and post them in a context of fear and threats as a way of ginning up public opposition to visibly carried firearms. They use the pictures to push for companies like Starbucks, Chipotle, and now Target to adopt corporate policies against lawful carry on their premises, and they lie about the activities of open carriers and the reaction they receive from the public.

Those who choose to open carry need to remember that their actions and demeanor reflects on all gun owners, and that their opponents will take any opportunity to make them look bad to the public. Accordingly, they should try to present a friendly, neighborly appearance and attitude, avoid political debate – especially heated arguments – and go out of their way to be courteous and cooperative. Other supporters of rights need to avoid undue public criticism of these protesters. That criticism only serves to support the Bloomie’s agenda.

When you see someone peacefully going about their business while armed – whether in person, or in a photograph – remember that this is your neighbor, your dentist, or a young man or woman who might have volunteered to fight terrorists in a foreign land. Their objective is not to scare, intimidate, or harass, nor is it to make carry of long guns a regular routine. They want to show that there is nothing to fear and ask that their right to have a firearm available for personal defense be recognized and respected in Texas as it is in most of the country.

You can help by letting the companies know that you appreciate them respecting people’s rights and would hate to have to take your business elsewhere because of a useless “No Guns” policy.

?2014 The Firearms Coalition, all rights reserved. Reprinting, posting, and distributing permitted with inclusion of this copyright statement. www.FirearmsCoalition.org.

About:
The Firearms Coalition is a loose-knit coalition of individual Second Amendment activists, clubs and civil rights organizations. Founded by Neal Knox in 1984, the organization provides support to grassroots activists in the form of education, analysis of current issues, and with a historical perspective of the gun rights movement. The Firearms Coalition is a project of Neal Knox Associates, Manassas, VA. Visit: www.FirearmsCoalition.org

Survivors of the Beirut explosion recount feeling the blast, its horrific aftermath

The Crisis of 2020 Unfolding as Debt Magnifies Collapse! Banks Prepare For Major Fallout!

$500 SILVER IS NO LONGER THE JOKE YOU THOUGHT IT WAS.

Survivors of the Beirut explosion recount feeling the blast, its horrific aftermath